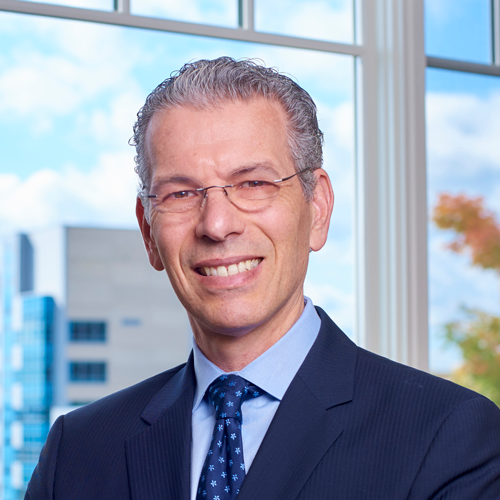 The way we've created trust is this focus on who the competitor is. The competitor for Geisinger 102 years ago was typhoid. The competitor today is opiates and diabetes and depression and cancer and heart disease, and that's who we're fighting.

Feinberg, a psychiatrist by training, was tapped to lead Geisinger in 2015 after spending two decades rising the ranks at UCLA Health, where he spent nearly seven years as CEO. He recently left the company to lead health efforts at Google.

After reportedly spurning an offer from an Amazon-led venture, Feinberg is headed to Google to lead multiple health efforts the tech giant has underway.

While it may not have the name recognition of a Mayo or Cleveland Clinic, Geisinger has been making big moves to push value-based care through genetic testing and nutrition-focused intervention.

Much of the system's success, industry players say, comes from Feinberg, who joined the system just a few years ago from UCLA.

Feinberg reportedly turned down an opportunity to lead the still-nameless Amazon-Berkshire Hathaway-J.P. Morgan Chase healthcare venture, choosing instead to continue working on what he told Healthcare Dive he was "most excited about" at Geisinger. But in November, Feinberg was tapped to lead health planning at Google.

"David Feinberg has enormous insight into the challenges of healthcare delivery and understands the nuts and bolts of running healthcare systems," Rita Numerof, a healthcare industry consultant, told Healthcare Dive. "He brings a unique perspective to innovation, which is what Google is all about. He's used innovation to drive improvement in healthcare quality and patient satisfaction, and he can reimagine healthcare to stand the business model on end."

Within three months of taking the reins at Geisinger, Feinberg introduced a plan to let patients dissatisfied with their care to request refunds up to $2,000, no holds barred.

The idea became a program called ProvenExperience, giving cash back to those unhappy with the care they received.

Last year, Geisinger refunded $411,325. This year’s figure is on track to be even higher.

"That's what I'm most proud of and that's what I try my hardest to make sure we don't screw up every day. It is crucial to this work."

That trust takes time and the ability to "engage in the community," Feinberg said. In turn, it allows Geisinger to launch programs like MyCode Community Health, a precision medicine program that the exec says has become the "largest biobank in the world of genetic information," thanks to a 90% participation rate among Geisinger patients.

With Feinberg at the helm, Geisinger has also zoomed in on social determinants of health. Earlier this year, the nonprofit integrated health system announced two pilots with York, Pennsylvania-based transit service Rabbittransit aimed at improving access to care for patients facing transportation barriers.

The organization also plans on franchising Fresh Food Farmacy, a food security program launched in 2016. By the new year, Geisinger will have opened two more sites and prescribed 1.5 million meals to patients, members, and neighbors alike, according to Feinberg.

Feinberg has a knack for making provocative statements — much like when he told attendees this year at HLTH that his job is to close all 13 of Geisinger's hospitals.

Along those lines, Feinberg told Healthcare Dive that his ideal healthcare system is one that allocates the majority of its resources toward addressing the social, economic and behavioral norms that influence health outcomes — factors like housing, literacy, public safety, substance abuse and exercise.

"I want everyone to get care like they're my mom."

It makes sense, then, that one of Feinberg’s frustrations with healthcare is the underutilization of and underinvestment in preventative measures that are known to be "safe and effective," such as prescribing fresh food to diabetes. Health systems are more concerned with the ROI of a fresh food program, he said, than they are with many medicines.

That’s the kind of thinking that reportedly landed Feinberg on the short list to lead the Amazon-BH-JPM venture early in the year — an opportunity he turned down. Feinberg then put out a statement saying that while he appreciates being "part of the conversation," he remains "100% committed to Geisinger" and attributed the acknowledgement to his team.

Healthcare Dive spoke to Feinberg just weeks before he announced he was leaving for Google, so his stated level of commitment to Geisinger is a head-scratcher.

Feinberg said he thinks the fledgling Amazon-led venture is "a great organization coming together." He’ll now be in direct competition with that company.

"I don't think I lead the organization. I think I'm at the bottom of the org chart."

But we'll also be keeping an eye on how the work he's done at Geisinger is sustained, specifically the launch of a national genomics program in 2019 and the franchising of Fresh Food Farmacy in areas outside of Geisinger's current market.

ProvenRecovery, Geisinger's opiate-free "prehabilitative" surgery program, designed to get patients healthy before they go under the knife, will also be worth watching once it begins producing outcomes. The program was rolled out system-wide in November for 100 inpatient procedures and, according to Feinberg, the pilot resulted in a "dramatic" decrease in mortality, length of stay and complications.

Filed Under: Health IT Hospital Administration

Subscribe to Healthcare Dive to get the must-read news & insights in your inbox.

Discover announcements from companies in your industry.

Get Healthcare Dive in your inbox