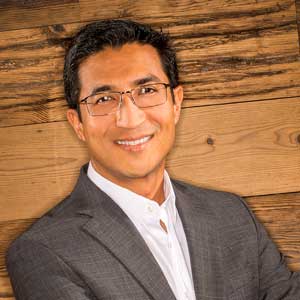 Design thinking will transform the future of healthcare.

Dr. Shrestha, a radiologist by training, studied at the University of Southern California Marshall School of Business. He came to UPMC from USC Radiology in 2007, rising to become Chief Innovation Officer at UPMC and EVP of its innovation and commercialization arm, UPMC Enterprises.

In a historically conservative industry such as healthcare, it's a breath of fresh air when an individual cuts through the pre-recorded sound bytes and offers a vibrant voice and original take. At University of Pittsburgh Medical Center, Dr. Rasu Shrestha has been a vocal champion of the system's innovations to advance care delivery.

"We're continuing to push on our original strategy that is able to leverage the living lab at UPMC" to push the envelope forward, Shrestha recently told Healthcare Dive. In part, that means moving care from an inpatient focal point to a distributed model. "Care is actually moving away from the hospitals," Shrestha said during a panel at the National Health Policy Conference (NHPC) in January. "The brick-and-mortar hospitals that we know today will not be the focal point of healthcare delivery tomorrow," he added.

UPMC Enterprises has acquired or partnered with a variety of companies to push innovation to the forefront of care delivery.

At Health 2.0 in Santa Clara, California, this year, Shrestha trumpeted a pilot program with Lantern, which has used CPT protocols working with behavioral health specialists to refine care delivery models in the mental health space through mobile platforms. Such a program adds proactive interventions for patients from a caregiver reviewing health data. Such initiatives seek to create a stickiness with the tools, but Shrestha adds getting the data to flow back and forth is important. "That's something we're trying to push forward," he said.

The pilot comes as hospitals and health systems are experiencing a huge sea change in the industry. Rising expenses and softening patient admissions are contributing to how providers are rethinking the future of their business strategies.

Health care shouldn't just be about surviving. It should be about thriving.

Nope, not there yet though. Working on it.#UPMCinnovates

Health 2.0 was built on the foundation of apps and interfaces inviting the user to engage and interact with the product. Moving toward Health 3.0, the technologies and those building the products are attempting to make healthcare delivery and the dissemination of information seamless and natural without the overt need for an application. Futurists are envisioning a time where data flows and providers can freely intervene and interact with patients using data points of health information. In addition, Health 3.0 seeks to enhance the patient’s engagement in the care delivery process.

Shrestha has committed to advancing a forward-looking perspective at UPMC. The system’s reputation has garnered the attention of newly-minted tech grads. Matt Rimer, VP of talent acquisition at UPMC, stated in FY2017 the system filled about 18,000 positions with 11,000 of those being external hires, an increase from the previous year by about 750 people.

Though in the innovation hub of Pittsburgh, the provider has stiff competition from the likes of Amazon and Facebook. However, UPMC "wins the mission game every time," Amy Cook, chief talent leader at UPMC Enterprises, told Healthcare Dive.

Dr. Shrestha and UPMC Enterprises will continue to explore advanced analytics and technologies while exploring impacts on patient outcomes. UPMC Enterprises is bullish on technology investments in the space so expect more activity in that arena.

View all | Post a press release
Accelerate Diagnostics announces commercialization of its Accelerate Arc™ system having comple…
From Accelerate Diagnostics
Industry Dive publications win 6 National Gold Azbees – most of any publisher
From Industry Dive
Taiwan proactively promotes e-sports culture through new invention with somatosensory interact…
From TAIWAN SMART CITY DEVELOPMENT PROJECT OFFICE OF INDUSTRIAL DEVELOPMENT BUREAU, M.O.E.A.
RepuGen Is Now a Panda Health Awarded Supplier
From RepuGen
Editors' picks
Latest in Hospitals
© 2022 Industry Dive. All rights reserved. | View our other publications | Privacy policy | Terms of use | Take down policy.
We use cookies to optimize your experience on our website and for analytics and advertising purposes. By continuing to use our site, you agree to our cookie policy. Learn more
Accept